In 2008 I was co-director and choreographer of a performance called Desert Walker by Motherboard (www.liveart.org) that took place on the Great Salt Playa in Utah, USA with people from Norway, Finland, Denmark and England.The performance took place only once and unannounced. It was based on the choreographic score of Samuel Beckett’s TV drama Quad (1981).

In July 2010 I traveled to Art Villa Garikula and held a workshop where a small scale version of this performance was re-enacted with an interdisciplinary group of artists and cultural workers from Georgia and France.

For the Fest i Nova exhibition I worked on a mixed media installation and performance event that seeks to tie these events together, drawing on documentation material and physical artefacts from both events.

I am interested in what happens when the same choreographic score is re-enacted elsewhere, and outside the confines of a screen or theatre. What senses and narratives of place can it evoke? How such ephemeral performance events, contextualized via the places they take part in and the people who participate in them, be documented without losing the sense of immediacy and presence?

My  solution was to come up with a plan that allowed for the continued reworking of the documentation material, adding new elements to it, and inviting people to participate in it. I arrived at Fest i Nova on Monday 27th September with a portable studio made up of ideas, materials and media-making and presentation equipment that can be carried onto a plane as hand baggage. Collaborating with people at the villa, an installation and performance event schedule was made and presented as the installation was constructed.

The remains of an archaic bunker-like refrigerator was given a thatched roof, and in and around it, with sunshine, thunderstorms, torrential rain and power cuts, the atmosphere of Desert Walker at  41°’ was re-imagine and recreated. 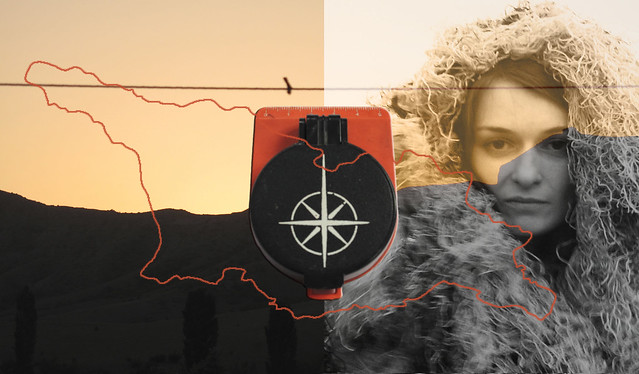 CREDITS
Thanks to Fest i Nova and the Art Villa Garikula community, especially George Simonishvili, Vasil Macharadze and Misha Chelidze for installation assistance.